What is a Generative Adversarial Network (GAN)? - Unite.AI

Generative Adversarial Networks (GANs) are types of neural network architectures capable of generating new data that conforms to learned patterns. GANs can be used to generate images of human faces or other objects, to carry out text-to-image translation, to convert one type of image to another, and to enhance the resolution of images (super resolution) among other applications. Because GANs can generate entirely new data, they are at the head of many cutting-edge AI systems, applications, and research. Yet how exactly do GANs work? Let’s explore how GANs function and take a look at some of their primary uses.

Different generative models have different methods of generating data and calculating probability distributions. For example, the Naive Bayes model operates by calculating a probability distribution for the various input features and the generative class. When the Naive Bayes model renders a prediction, it calculates the most likely class by taking the probability of the different variables and combining them together. Other non-deep learning generative models include Gaussian Mixture Models and Latent Dirichlet Allocation (LDA). Deep leaning-based generative models include Restricted Boltzmann Machines (RBMs), Variational Autoencoders (VAEs), and of course, GANs.

Generative Adversarial Networks were first proposed by Ian Goodfellow in 2014, and they were improved upon by Alec Redford and other researchers in 2015, leading to a standardized architecture for GANs. GANs are actually two different networks joined together. GANs are composed of two halves: a generation model and a discrimination model, also referred to as the generator and discriminator.

Let’s look at the entire training process for a hypothetical image generation task.

To begin with, the GAN is trained using genuine, real images as part of the training dataset. This sets up the discrimnator model to distinguish between generated images and real images. It also produces the data distribution that the generator will use to produce new data.

The generator takes in a vector of random numerical data and transforms them based on the Gaussian distribution, returning an image. This generated images, alongside some genuine images from the training dataset, is fed into the discriminator model. The discriminator will render a probabilistic prediction about the nature of the images it receives, outputting a value between 0 and 1, where 1 is typically authentic images and 0 is a fake image.

The generative and discrimination models are playing a zero-sum game with each other. A zero-sum game is one where the gains by one side come at the cost of the other side (the sum is both actions is zero ex). When the discriminator model is able to successfully distinguish between real and fake examples, no changes are made to the parameters of the discriminator. However, large updates are made to the model’s parameters when it fails to distinguish between real and fake images. The inverse is true for the generative model, it is penalized (and its parameters updated) when it fails to fool the discriminative model, but otherwise it’s parameters are unchanged (or it is rewarded).

Ideally, the generator is able to improve its performance to a point where the discriminator cannot discern between the fake and real images. This means that the discriminator will always be rendering probabilities of %50 for real and fake images, meaning the generated images should be indistinguishable from the genuine images. In practice, GANs typically won’t reach this point. However, the generative model doesn’t need to create perfectly similar images to still be useful for the many tasks GANs are used for.

GANs have a number of different applications, most of them revolving around the generation of images and components of images. GANs are commonly used in tasks where the required image data is missing or limited in some capacity, as a method of generating the required data. Let’s examine some of the common uses cases for GANs. 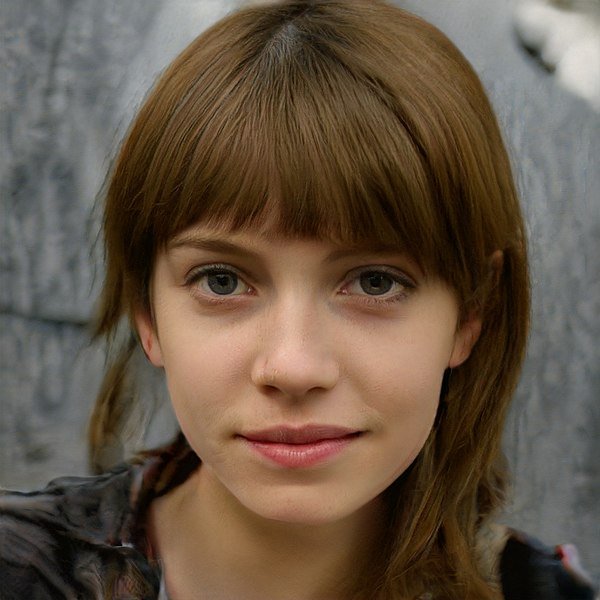 The woman in this photo doesn’t exist. The image was generated by StyleGAN. Photo: Owlsmcgee via Wikimedia Commons, Public Domain (https://commons.wikimedia.org/wiki/File:Woman_1.jpg)

When sufficiently trained, GANs can be used to generate extremely realistic images of human faces. These generated images can be used to help train face recognition systems.

GANs excel at image translation. GANs can be used to colorize black and white images, translate sketches or drawings to photographic images, or convert images from day to night.

Text-to-Image translation is possible through the use of GANs. When provided with text that describes an image and that accompanying image, a GAN can be trained to create a new image when provided with a description of the desired image.

GANs can be used to edit existing photographs. GANs remove elements like rain or snow from an image, but they can also be used to repair old, damaged images or corrupted images.

Related Topics:101GANGenerative Adversarial Networks
Up Next

What is Dimensionality Reduction?