Connect with us
Python Libraries: 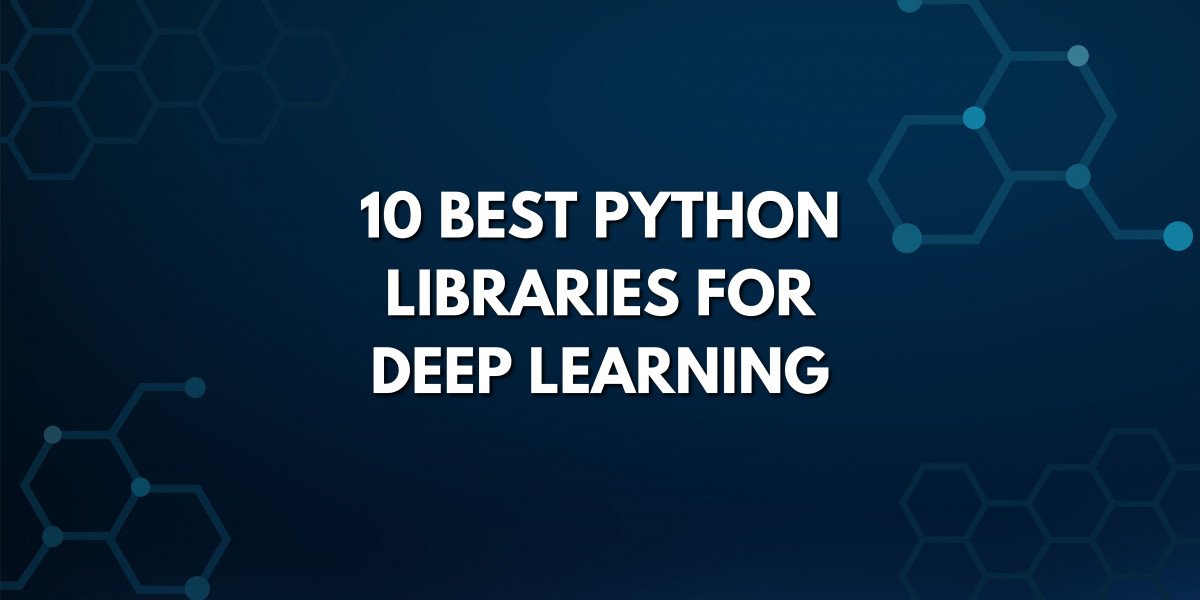 Python has been steadily rising to become a top programming language. There are many reasons for this, including its extremely high efficiency when compared to other mainstream languages. It also features English-like commands and syntax, which makes it a top choice for beginner coders.

Perhaps the biggest selling point of Python is its vast amount of open-source libraries that enable the language to be used for everything from data science to data manipulation.

Deep learning is a subfield of machine learning involving artificial neural networks, which are algorithms inspired by the structure of the human brain. Deep learning has many applications and is used in many of today’s AI technologies, such as self-driving cars, news aggregation tools, natural language processing (NLP), virtual assistants, visual recognition, and much more.

Let’s take a look at the 10 best Python libraries for deep learning:

TensorFlow is widely considered one of the best Python libraries for deep learning applications. Developed by the Google Brain Team, it provides a wide range of flexible tools, libraries, and community resources. Beginners and professionals alike can use TensorFlow to construct deep learning models, as well as neural networks.

TensorFlow has an architecture and framework that are flexible, enabling it to run on various computational platforms like CPU and GPU. With that said, it performs best when operated on a tensor processing unit (TPU). The Python library is often used to implement reinforcement learning in deep learning models, and you can directly visualize the machine learning models.

Here are some of the main features of TensorFlow:

PyTorch enables you to carry out many tasks, and it is especially useful for deep learning applications like NLP and computer vision.

Some of the best aspects of PyTorch include its high speed of execution, which it can achieve even when handling heavy graphs. It is also a flexible library, capable of operating on simplified processors or CPUs and GPUs. PyTorch has powerful APIs that enable you to expand on the library, as well as a natural language toolkit.

Here are some of the main features of PyTorch:

One of the other well-known Python libraries, NumPy can be seamlessly utilized for large multi-dimensional array and matrix processing. It relies on a large set of high-level mathematical functions, which makes it especially useful for efficient fundamental scientific computations in deep learning.

NumPy arrays require a lot less storage area than other Python lists, and they are faster and more convenient to use. The data can be manipulated in the matrix, transposed, and reshaped with the library. NumPy is a great option to increase the performance of deep learning models without too much complex work required.

Here are some of the main features of NumPy:

Scikit-Learn was originally a third-party extension to the SciPy library, but it is now a standalone Python library on Github. Scikit-Learn includes DBSCAN, gradient boosting, support vector machines, and random forests within the classification, regression, and clustering methods.

One of the greatest aspects of Scikit-Learn is that it’s easily interoperable with other SciPy stacks. It is also user-friendly and consistent, making it easier to share and use data.

Here are some of the main features of Scikit-learn:

That brings us to Scipy, which is a free and open-source library based on Numpy. SciPy is one of the best Python libraries out there thanks to its ability to perform scientific and technical computing on large datasets. It is accompanied by embedded modules for array optimization and linear algebra.

The programming language includes all of NumPy’s functions, but it turns them into user-friendly, scientific tools. It is often used for image manipulation and provides basic processing features for high-level, non-scientific mathematical functions.

Here are some of the main features of SciPy:

One of the open-source Python libraries mainly used in data science and deep learning subjects is Pandas. The library provides data manipulation and analysis tools, which are used for analyzing data. The library relies on its powerful data structures for manipulating numerical tables and time series analysis.

The Pandas library offers a fast and efficient way to manage and explore data by providing Series and DataFrames, which represent data efficiently while also manipulating it in different ways.

Here are some of the main features Pandas:

Here are some of the main features of CNTK:

Kears is yet another notable open-source Python library used for deep learning tasks, allowing for rapid deep neural network testing. Keras provides you with the tools needed to construct models, visualize graphs, and analyze datasets. On top of that, it also includes prelabeled datasets that can be directly imported and loaded.

The Keras library is often preferred due to it being modular, extensible, and flexible. This makes it a user-friendly option for beginners. It can also integrate with objectives, layers, optimizers, and activation functions. Keras operates in various environments and can run on CPUs and GPUs. It also offers one of the widest ranges for data types.

Here are some of the main features of Keras:

Nearing the end of our list is Theano, a numerical computation Python library specifically developed for machine learning and deep libraries. With this tool, you will achieve efficient definition, optimization, and evaluation of mathematical expressions and matrix calculations. All of this enables Theano to be used for the employment of dimensional arrays to construct deep learning models.

Theano is used by a lot of deep learning developers and programmers thanks to it being a highly specific library. It can be used with a graphics processing unit (GPU) instead of a central processing unit (CPU).

Here are some of the main features of Theano:

Closing out our list of the 10 best Python libraries for deep learning is MXNet, which is a highly scalable open-source deep learning framework. MXNet was designed to train and deploy deep neural networks, and it can train models extremely fast.

MXNet supports many programming languages, such as Python, Julia, C, C++, and more. One of the best aspects of MXNet is that it offers incredibly fast calculation speeds and resource utilization on GPU.

Here are some of the main features of MXNet: