What is Natural Language Processing (NLP)?

Natural Language Processing (NLP) is the study and application of techniques and tools that enable computers to process, analyze, interpret, and reason about human language. NLP is an interdisciplinary field and it combines techniques established in fields like linguistics and computer science. These techniques are used in concert with AI to create chatbots and digital assistants like Google Assistant and Amazon’s Alexa.

Let’s take some time to explore the rationale behind Natural Language Processing, some of the techniques used in NLP, and some common uses cases for NLP.

In order for computers to interpret human language, they must be converted into a form that a computer can manipulate. However, this isn’t as simple as converting text data into numbers. In order to derive meaning from human language, patterns have to be extracted from the hundreds or thousands of words that make up a text document. This is no easy task. There are few hard and fast rules that can be applied to the interpretation of human language. For instance, the exact same set of words can mean different things depending on the context. Human language is a complex and often ambiguous thing, and a statement can be uttered with sincerity or sarcasm.

Despite this, there are some general guidelines that can be used when interpreting words and characters, such as the character “s” being used to denote that an item is plural. These general guidelines have to be used in concert with each other to extract meaning from the text, to create features that a machine learning algorithm can interpret.

Natural Language Processing involves the application of various algorithms capable of taking unstructured data and converting it into structured data. If these algorithms are applied in the wrong manner, the computer will often fail to derive the correct meaning from the text. This can often be seen in the translation of text between languages, where the precise meaning of the sentence is often lost. While machine translation has improved substantially over the past few years, machine translation errors still occur frequently. 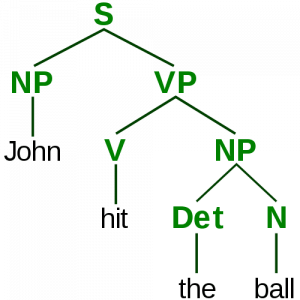 Examples of syntax include:

Lemmatization refers to distilling the different inflections of a word down to a single form. Lemmatization takes things like tenses and plurals and simplifies them, for example, “feet” might become “foot” and “stripes” may become “stripe”.  This simplified word form makes it easier for an algorithm to interpret the words in a document.

Morphological segmentation is the process of dividing words into morphemes or the base units of a word. These units are things like free morphemes (which can stand alone as words) and prefixes or suffixes.

Part-of-speech tagging is simply the process of identifying which part of speech every word in an input document is.

Parsing refers to analyzing all the words in a sentence and correlating them with their formal grammar labels or doing grammatical analysis for all the words.

Sentence breaking, or sentence boundary segmentation, refers to deciding where a sentence begins and ends.

Stemming is the process of reducing words down to the root form of the word. For instance, connected, connection, and connections would all be stemmed to “connect”.

Word Segmentation is the process of dividing large pieces of text down into small units, which can be words or stemmed/lemmatized units.

Named entity recognition involves tagging certain text portions that can be placed into one of a number of different preset groups. Pre-defined categories include things like dates, cities, places, companies, and individuals.

Word-sense disambiguation is the process of assigning meaning to words within a text based on the context the words appear in.

Regular multilayer perceptrons are unable to handle the interpretation of sequential data, where the order of the information is important. In order to deal with the importance of order in sequential data, a type of neural network is used that preserves information from previous timesteps in the training.

Recurrent Neural Networks are types of neural networks that loop over data from previous timesteps, taking them into account when calculating the weights of the current timestep. Essentially, RNN’s have three parameters that are used during the forward training pass: a matrix based on the Previous Hidden State, a matrix based on the Current Input, and a matrix that is between the hidden state and the output. Because RNNs can take information from previous timesteps into account, they can extract relevant patterns from text data by taking earlier words in the sentence into account when interpreting the meaning of a word.

Another type of deep learning architecture used to process text data is a Long Short-Term Memory (LSTM) network. LSTM networks are similar to RNNs in structure, but owing to some differences in their architecture they tend to perform better than RNNs. They avoid a specific problem that often occurs when using RNNs called the exploding gradient problem. 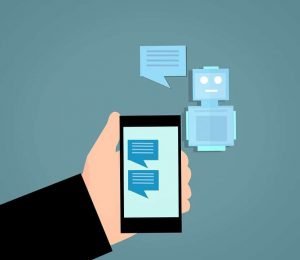 Because Natural Language Processing involves the analysis and manipulation of human languages, it has an incredibly wide range of applications. Possible applications for NLP include chatbots, digital assistants, sentiment analysis, document organization, talent recruitment, and healthcare.

Chatbots and digital assistants like Amazon’s Alexa and Google Assistant are examples of voice recognition and synthesis platforms that use NLP to interpret and respond to vocal commands. These digital assistants help people with a wide variety of tasks, letting them offload some of their cognitive tasks to another device and free up some of their brainpower for other, more important things. Instead of looking up the best route to the bank on a busy morning, we can just have our digital assistant do it.

Sentiment analysis is the use of NLP techniques to study people’s reactions and feelings to a phenomenon, as communicated by their use of language. Capturing the sentiment of a statement, like interpreting whether a review of a product is good or bad, can provide companies with substantial information regarding how their product is being received.

Automatically organizing text documents is another application of NLP. Companies like Google and Yahoo use NLP algorithms to classify email documents, putting them in the appropriate bins such as “social” or “promotions”. They also use these techniques to identify spam and prevent it from reaching your inbox.

Groups have also developed NLP techniques are being used to identify potential job hires, finding them based on relevant skills. Hiring managers are also using NLP techniques to help them sort through lists of applicants.

NLP techniques are also being used to enhance healthcare. NLP can be used to improve the detection of diseases. Health records can be analyzed and symptoms extracted by NLP algorithms, which can then be used to suggest possible diagnoses. One example of this is Amazon’s Comprehend Medical platform, which analyzes health records and extracts diseases and treatments. Healthcare applications of NLP also extend to mental health. There are apps such as WoeBot, which talks users through a variety of anxiety management techniques based in Cognitive Behavioral Therapy.

GPT-2, Artificial Intelligence Text-Generator Is Being Released In Full