What is Linear Regression? - Unite.AI

Assume that we have a dataset covering hard-drive sizes and the cost of those hard drives.

Let’s suppose that the dataset we have is comprised of two different features: the amount of memory and cost. The more memory we purchase for a computer, the more the cost of the purchase goes up. If we plotted out the individual data points on a scatter plot, we might get a graph that looks something like this: 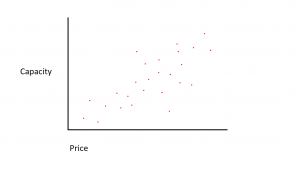 The exact memory-to-cost ratio might vary between manufacturers and models of hard drive, but in general, the trend of the data is one that starts in the bottom left (where hard drives are both cheaper and have smaller capacity) and moves to the upper right (where the drives are more expensive and have higher capacity).

If we had the amount of memory on the X-axis and the cost on the Y-axis, a line capturing the relationship between the X and Y variables would start in the lower-left corner and run to the upper right. 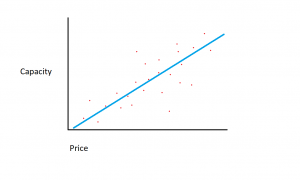 Lines are typically represented by the equation: Y = m*X + b. X refers to the dependent variable while Y is the independent variable. Meanwhile, m is the slope of the line, as defined by the “rise” over the “run”. Machine learning practitioners represent the famous slope-line equation a  little differently, using this equation instead:

After establishing the formula for linear regression, the machine learning model will use different values for the weights, drawing different lines of fit. Remember that the goal is to find the line that best fits the data in order to determine which of the possible weight combinations (and therefore which possible line) best fits the data and explains the relationship between the variables.

A cost function is used to measure how close the assumed Y values are to the actual Y values when given a particular weight value. The cost function for linear regression is mean squared error, which just takes the average (squared) error between the predicted value and the true value for all of the various data points in the dataset. The cost function is used to calculate a cost, which captures the difference between the predicted target value and the true target value. If the fit line is far from the data points, the cost will be higher, while the cost will become smaller the closer the line gets to capturing the true relationships between variables. The weights of the model are then adjusted until the weight configuration that produces the smallest amount of error is found.

What is a KNN (K-Nearest Neighbors)?

What are Support Vector Machines?