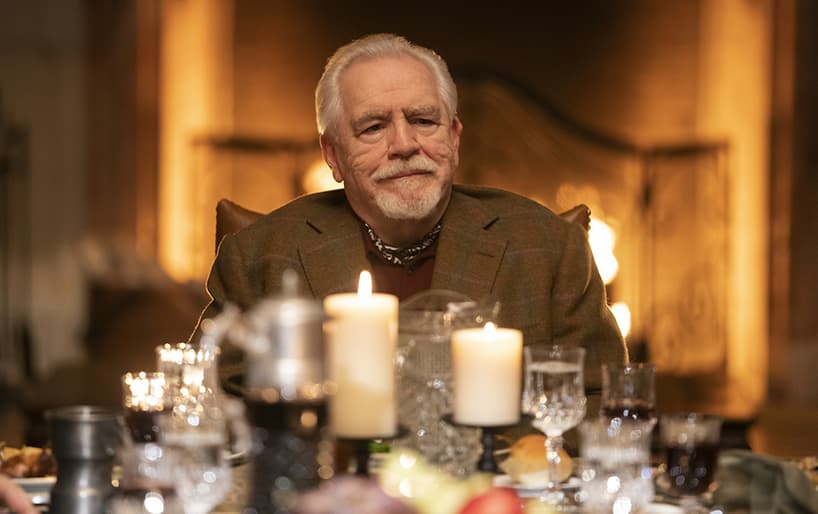 Talk isn’t always cheap. In November of 2021, Tesla stock lost an estimated $21 billion from its valuation after founder Elon Musk invited his 70 million followers to take part in a poll on whether he should sell 10% of his own shares in the company – only one episode in a long-term series of apparently reckless social media communications by Musk that are thought to have contributed to a $175 billion stock price plunge for Tesla towards the end of 2021.

Though it’s long been anecdotally considered that CEO behavior has a direct relationship to company performance, the improbability of getting billionaire executives to take standardized personality tests has left personality-based stock prediction effectively a pseudo-science.

The analytical research sector’s effort to create predictive models in this regard has, to date, concentrated on the Big 5 personality traits, where CEO disposition is evaluated in terms of openness, conscientiousness, extraversion*, agreeableness, and neuroticism.

It isn’t easy to extract all of these traits in an empirically sound manner, solely based on speech and text. A 2020 study from the Academy of Management was only able to analyze three of the Big 5 traits (conscientiousness, neuroticism, and extroversion), since openness and agreeableness are more difficult to identify, particularly from text.

A new collaboration between universities in Germany and Italy has taken a novel approach to formulating a predictive framework of this nature, by using publicly available data to map 32 high-level CEOs into the Myers-Brigg Type Indicator framework (MBTI).

You probably know MBTI, even if you didn’t know its name. Based on the work of Carl Jung, MBTI classifies personalities into 4-character entities such as ENTJ (‘extrovert’, ‘sensing’, ‘thinking’, ‘judging’), and has become a popular tool for self-analysis on social media over the last decade or so.

The four axes from which traits can be selected are: extraversion vs. introversion (E-I); sensing vs. intuition (S-N); thinking vs. feeling (T-F); and judging vs. perceiving (J-P).

The paper’s authors used crowdsourced data to create MBTI profiles of CEOs, and then created a separate dataset and architecture that was able to successfully predict the influence of CEO personality on stock performance, using Elon Musk as a central test subject.

The new research seeks to create an objective method of stock price prediction based on the estimated personalities of Chief Executive Officers (and, specifically, on what they say in public), in accordance with the Upper Echelons Theory proposed in 1984, which first mooted a correlation between CEO personality and company performance.

The second stage of the project, which seeks to correlate utterances with subsequent stock price variations, produces an algorithm that can indicate text segments likely to have a positive or negative effect. 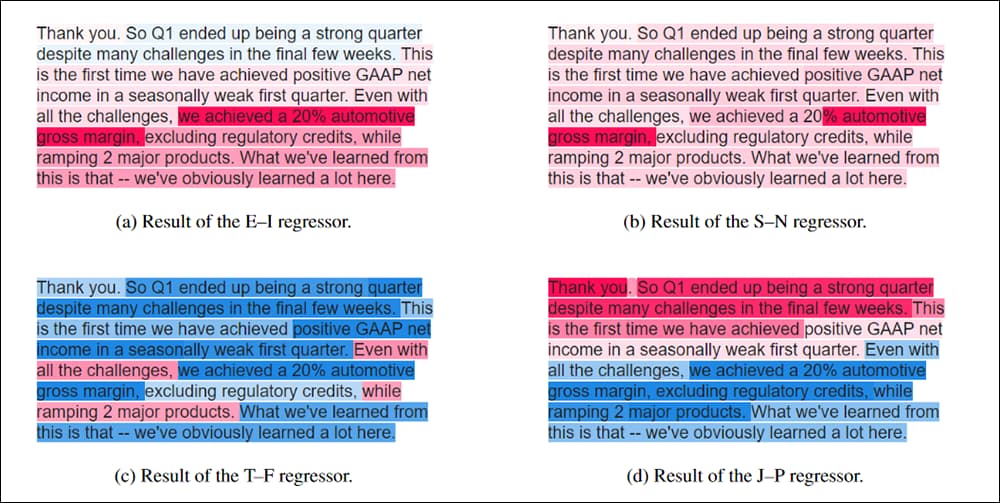 Shapley Additive Explanations (SHAP) heatmaps applied to segments of text from Elon Musk’s Q1 2020 earnings call. Red and blue are negative and positive earnings indicators, respectively. Results vary across trait axes for the MBTI mappings, and the most pertinent results will be those that accord with the core estimated character of the speaker (i.e. ‘ENTJ’).

The paper is titled Top-Down Influence? Predicting CEO Personality and Risk Impact from Speech Transcripts, and comes from three researchers across the University of Mannheim and Bocconi University in Milan.

The authors used three sources to gather data for the personality prediction component of the project. To identify and characterize the CEOs, they used the 88,000 earnings call transcripts from Reuters’ Refinitiv EIKON dataset; and Compustat Execucomp, from Wharton Research Data Services at the University of Pennsylvania, which was used to programmatically match identified CEOs with age and gender data.

To obtain MBTI personality labels, the researchers used the Personality Database, a crowdsourced platform of user-contributed assessments of personality, where adequate levels of data for 32 CEOs (including Steve Jobs and Elon Musk) were available.

Rather than defining each CEO as a typical MBTI 4-character abbreviation, the authors represented each personality profile as a vector of four continuous variables on a scale of 0-1, in accord with the crowdsourced estimations, allowing a more accurate mapping between the Big 5 and MBTI scales.

To validate the crowdsourced estimates, a correlation matrix was constructed between the crowd-based MBTI and Big 5 votes for all the appropriate personalities identified in the data. The two systems were found to reach consensus on the user-contributed evaluations.

(Since opinions differ on the extent to which psychological evaluation is subjective, this intra-system consensus only signifies that the two contrasting scales converge across their differing criteria for personality assessment; the objective value of this agreement depends on the extent to which you subscribe to either system.)

The authors tested BERT (base), RoBERTa (base) and Support Vector Machine (SVM) with trigram TF–IDF as potential models. After training, RoBERTa was found to perform best across all axes. In the image below, we see the models’ various estimations of personality for Elon Musk: 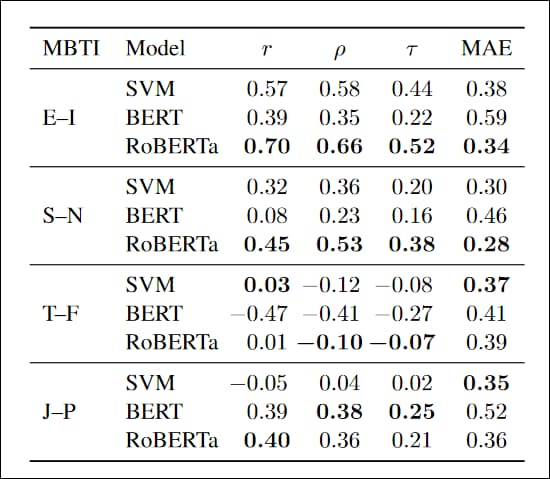 Correlated results for a personality regression task for Elon Musk. E-I = extraversion-introversion; T-F = thinking-feeling; S-I = sensing-intuition; and J-P = judging-perceiving. SVM was trained on TF-IDF vectors, while the other two models were trained on text.

The authors note that the best indicators occur for extraversion-introversion, and the worst for judging-perceiving, perhaps because the latter are difficult to deduce from text. They predict that future work which includes speech indicators – such as voice modulation and speech intervals – could add new interpretable dimensions to the data for these indicators.

To facilitate the risk regression component of the project, in accordance with upper echelons theory, the authors then merged the earnings call data with databases from IBES, CRSP and Compustat Execucomp.

To develop useful indices of variation in stock prices following a declaration from a CEO, they incorporated various risk proxies from prior works, and also incorporated age and gender, to assess possible confounding effects. 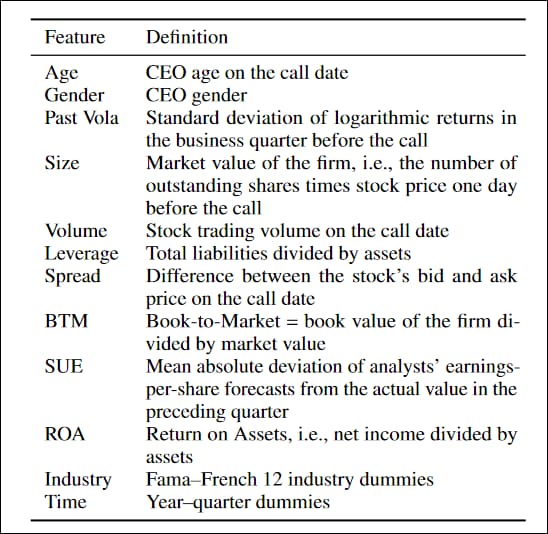 Risk returns were calculated based on volatility indices following the week after an announcement. Since RoBERTa performed best in the earlier module, this was used exclusively for the risk regression stage.

Commenting on the results obtained by using a personality matrix as a stock volatility forecasting method, the authors state:

‘Notably, these results are robust to age- and gender-fixed effects.’ 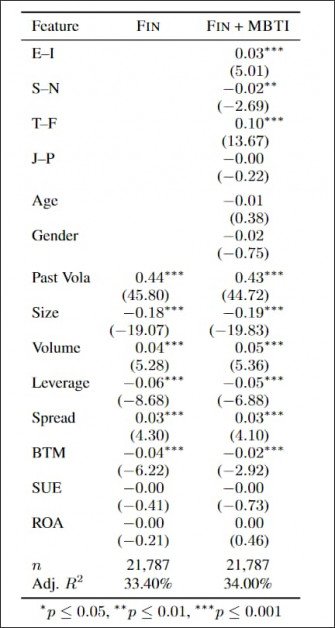 The researchers intend to develop the model in the future so that a single regressor can output all four MBTI dimensions, as well as incorporating non-text data such as speech signals.

*Myers-Briggs’s spelling of this word is particular to their study.