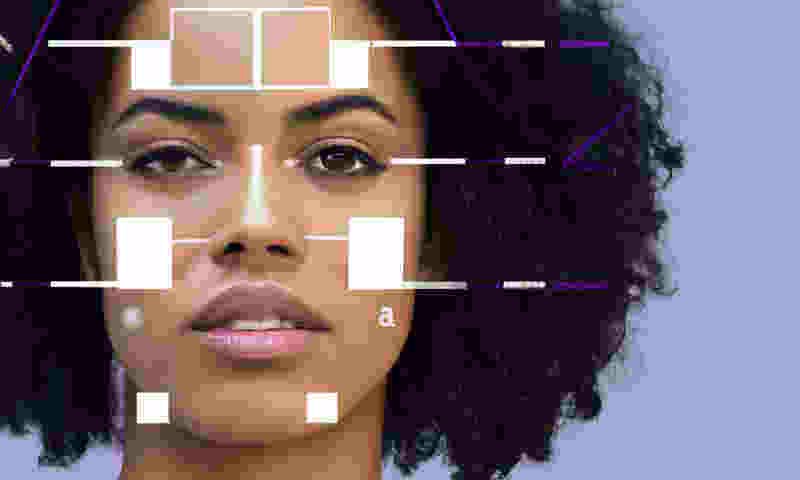 A new study from the UK has concluded that lossy compression techniques in JPEG images can have an adverse influence on the effectiveness of facial recognition systems, making such systems more likely to incorrectly identify a non-Caucasian person.

‘Via an extensive experimental setup, we demonstrate that common lossy image compression approaches have a more pronounced negative impact on facial recognition performance for specific racial phenotype categories such as darker skin tones (by up to 34.55%).’

The results also indicate that chroma subsampling, which reduces the color information (rather than the brightness information) across sections of a face image increases the False Matching Rate (FMR) across a range of tested datasets, many of which are standard repositories for computer vision. 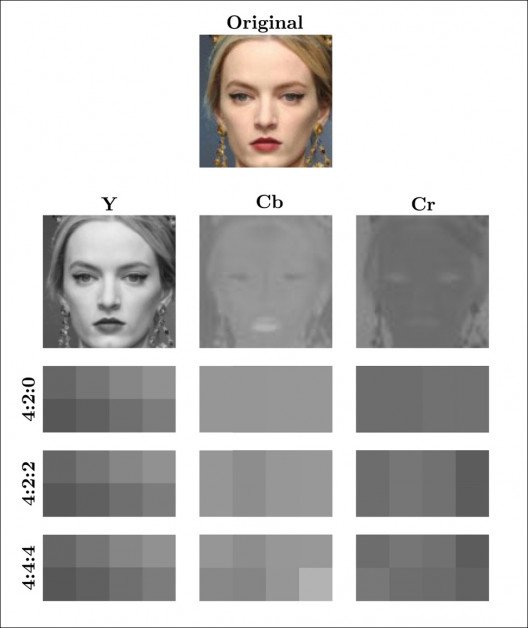 Chroma subsampling operations on a source image, at varying rates, have a clear effect on the extent to which detail is preserved, and the extent to which sub-tones simply ‘blend’ into each other, sacrificing detail and determining features. Please note that this image in itself may be subject to compression, and refer to the source paper for accurate resolution. Source: https://arxiv.org/pdf/2208.07613.pdf

Chroma subsampling is applied as an additional economic measure in JPEG compression because people are less able to perceive reductions in the complexity and range of a color-bands than computer vision systems, which take these ‘aggregations’ far more literally than we do.

The researchers for the new study have found that removing chroma subsampling from the compression process lessens this negative effect by up to 15.95%, though it does not completely remove the problem.

‘[The] use of lossy image compression during inference adversely affects the performance of contemporary face recognition approaches on a subset of race-related facial phenotype grouping (i.e. darker skin tones, monolid eye shape) and that its effect is present regardless of whether compressed imagery is used for model training.’

The paper underlines the consequences of image compression on the computer vision research sector, which were spelled out in some detail in a 2021 study from the University of Maryland and Facebook AI.

It’s a difficult issue to remediate; even if the storage and bandwidth issues that make compression necessary were eliminated overnight, and even if all the low-quality images that populate twenty or more years of datasets in the sector were suddenly recompressed at a better rate from high-quality sources, it would represent a ‘reset’ of the continuity of academic benchmarking tools over the past few decades. The CV community has, in effect, become accustomed to the problem, to the point where it represents a notable technical debt.

Racial bias in facial recognition (FR) has become a hot media topic in recent years, prompting a concerted effort in the research community to eliminate it from affected systems. However, the dependence on the global research body on an excessively limited number of ‘gold standard’ datasets, many of which are either not racially balanced or poorly labeled in this respect, exacerbates the challenge.

The researchers of the new paper additionally note a dissonance between image acquisition standards and the standards set by the general run of facial recognition benchmarks, stating*:

‘However, common face recognition benchmarks do not conform to the ISO/IEC 19794-5 and ICAO 9303 standards. Moreover, in-the-wild samples are often obtained under the varying camera and environmental conditions to challenge the proposed solutions.

‘Nevertheless, most facial image samples within such datasets are compressed via lossy JPEG compression.’

The authors of the new work state that their future efforts will examine the impact of lossy image quantization on diverse face recognition frameworks, and offer possible methods to improve the fairness of these systems.

The new paper is titled Does lossy image compression affect racial bias within face recognition?, and comes from three researchers at Imperial College London, together with one from the InsightFace deep face analysis library.

For their experiments, the researchers used the ImageMagick and libjpeg open source libraries to create versions of the source data images at various increments of compression.

For an initial overview of the effects of compression, the authors studied the effects of Peak signal-to-noise ratio (PSNR) on four different levels of JPEG compression on the Racial Faces in-the-Wild (RFW) dataset. 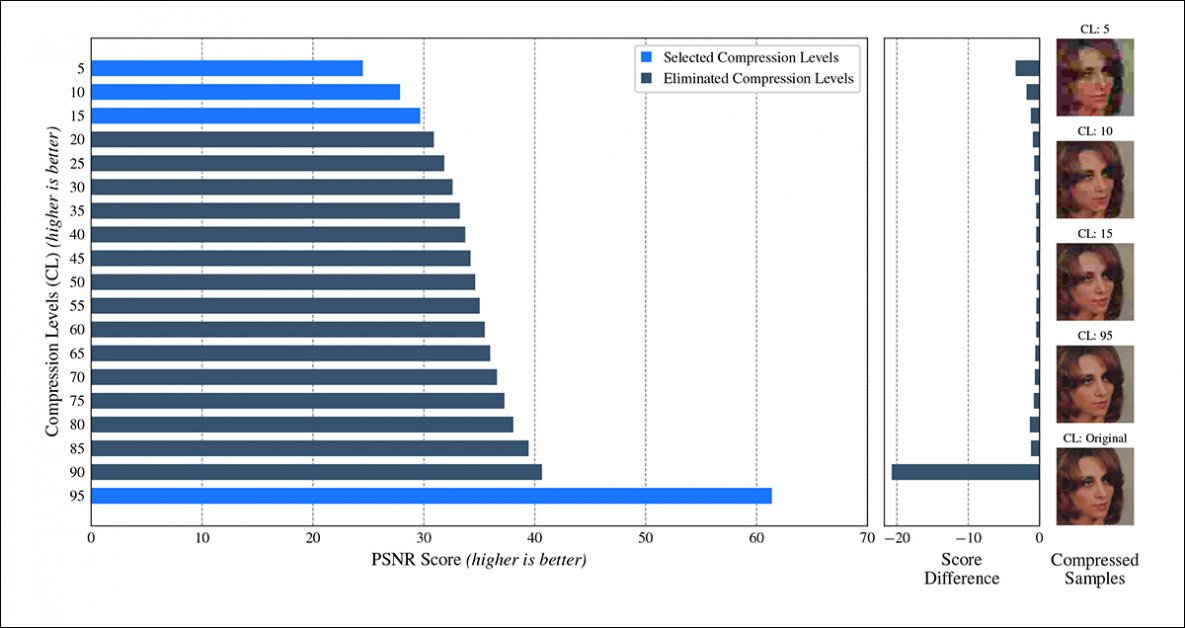 PSNR scores for the Racial Faces-in-the-Wild dataset, demonstrating the extent to which compression can affect recognition capabilities for compressed images.

Among other tests, they conducted research on a racially imbalanced dataset, and another that was racially balanced. For the racially balanced set, they used the Additive Angular Margin Loss (ArcFace) function with ResNet101v2, on the original VGGFace2 benchmark dataset, which contains 3.3 million images featuring 8631 racially-imbalanced subjects.

For testing, the researchers used the RFW dataset. The system was trained four times, at four different levels of compression, resulting in four ArcFace models.

For the racially-balanced set, the same frameworks were initially employed on the original aligned BUPT-Balanced benchmark dataset, which contains 28,000 faces balanced across the four groups African, Asian, Indian, and Caucasian, each race represented by 7000 images. As with the racially-imbalanced dataset, four ArcFace models were obtained in this way.

Additionally, the researchers reproduced the effects of compressed and non-compressed training by removing chroma subsampling, in order to measure its effect on performance. 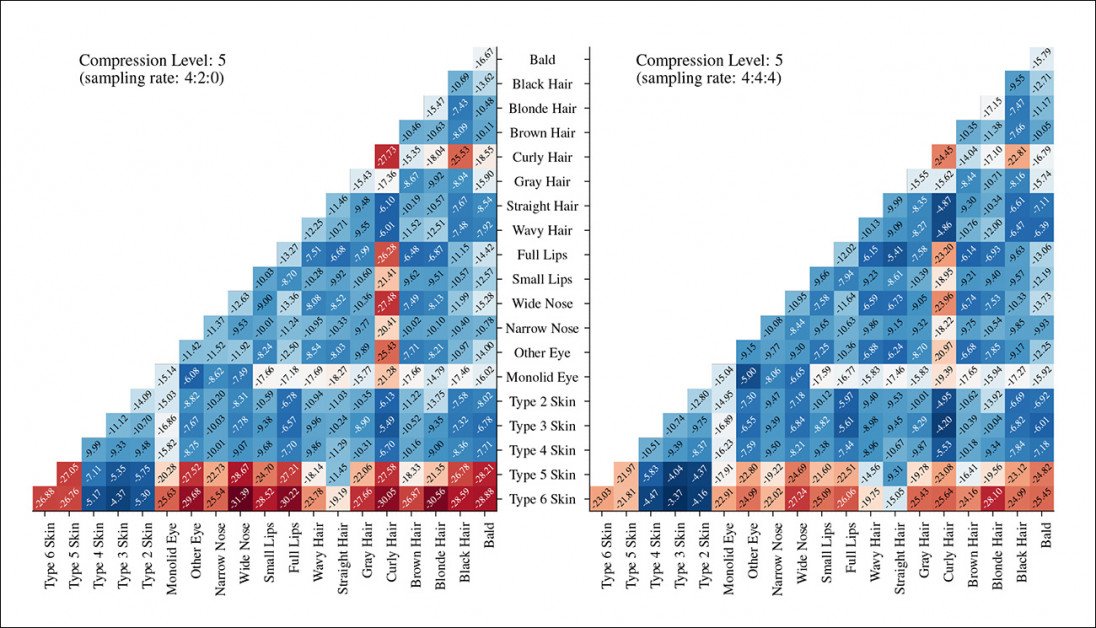 A sample from the paper’s extensive results charts, which are too large and numerous to reproduce here – please see the source paper for better resolution and full results. Here, we see the gamut of FMR performance across increasingly degraded/compressed face images for VGGFace2, in a range that includes uncompressed or little-compressed quality.