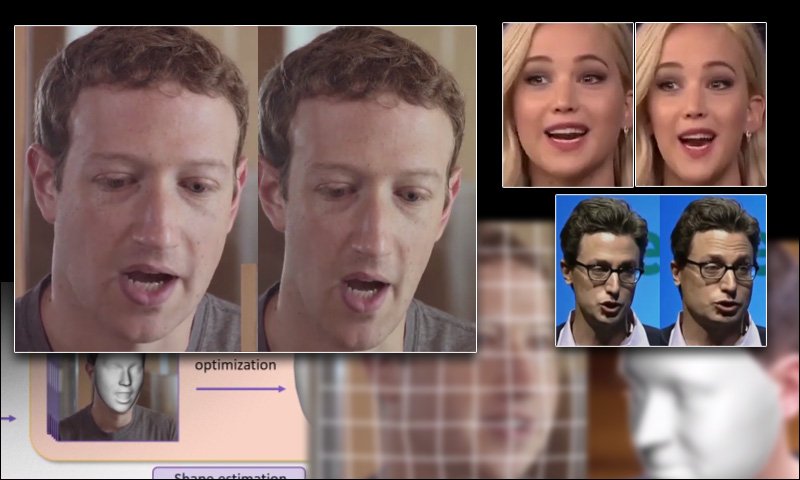 A research collaboration between China and the UK has devised a new method to reshape faces in video. The technique allows for convincing broadening and narrowing of facial structure, with high consistency and an absence of artifacts.

From a YouTube video used as source material by the researchers, actress Jennifer Lawrence appears as a more gaunt personality (right). See the accompanying video embedded at the bottom of the article for many more examples at better resolution. Source: https://www.youtube.com/watch?v=tA2BxvrKvjE

This kind of transformation is usually only possible through traditional CGI methods that would need to entirely recreate the face via detailed and expensive motion-capping, rigging and texturing procedures.

Instead, what CGI there is in the technique is integrated into a neural pipeline as parametric 3D face information that’s subsequently used as a basis for a machine learning workflow.

Traditional parametric faces are increasingly being used as guidelines for transformative processes which use AI instead of CGI. Source: https://arxiv.org/pdf/2205.02538.pdf

‘Our aim is to generate high-quality portrait video reshaping [results] by editing the overall shape of the portrait faces according to natural face deformation in real world. This can be used for applications such as shapely face generation for beatification, and face exaggeration for visual effects.’

Though 2D face-warping and distortion has been available to consumers since the advent of Photoshop (and has led to strange and often unacceptable sub-cultures around face distortion and body dysmorphia), it’s a tough trick to pull off in video without using CGI.

Body reshaping is currently a field of intense interest in the computer vision sector, mainly due to its potential in fashion ecommerce, though making someone appear taller or skeletally diverse is currently a notable challenge.

Likewise, changing the shape of a head in video footage in a consistent and convincing manner has been the subject of prior work from the new paper’s researchers, though that implementation suffered from artifacts and other limitations. The new offering extends the capability of that prior research from static to video output.

The new system was trained on a desktop PC with an AMD Ryzen 9 3950X with 32GB of memory, and uses an optical flow algorithm from OpenCV for motion maps, smoothed by the StructureFlow framework; the Facial Alignment Network (FAN) component for landmark estimation, which is also used in the popular deepfakes packages; and the Ceres Solver to resolve optimization challenges.

An extreme example of facial widening with the new system.

The paper is titled Parametric Reshaping of Portraits in Videos, and comes from three researchers at  Zhejiang University, and one from the University of Bath.

Under the new system, the video is extracted out into an image sequence, and a rigid pose is first estimated for each face. Then a representative number of subsequent frames are jointly estimated to construct consistent identity parameters along the entire run of images (i.e. the frames of the video).

After this, the expression is evaluated, yielding a reshaping parameter that’s implemented by linear regression. Next a novel signed distance function (SDF) approach constructs a dense 2D mapping of the facial lineaments prior to and after reshaping.

Finally, a content-aware warping optimization is performed on the output video.

The process makes use of a 3D Morphable Face Model (3DMM), an increasingly popular adjunct to neural and GAN-based face synthesis systems, as well as being applicable for deepfake detection systems. 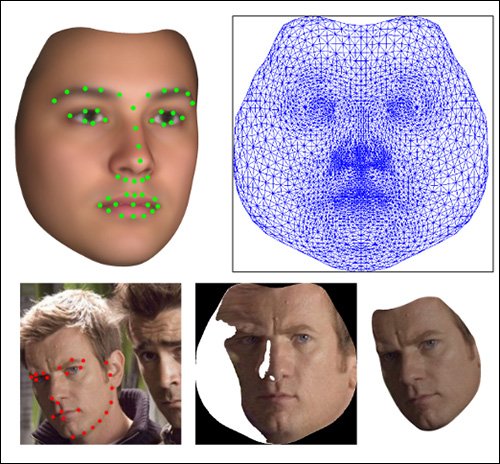 Not from the new paper, but an example of a 3D Morphable face Model (3DMM) – a parametric prototype face used in the new project. Top left, landmark application on a 3DMM face. Top right, the 3D mesh vertices of an isomap. Bottom left shows landmark fitting; bottom-middle, an isomap of the extracted face texture; and bottom right, a resultant fitting and shape. Source: http://www.ee.surrey.ac.uk/CVSSP/Publications/papers/Huber-VISAPP-2016.pdf

The workflow of the new system must consider cases of occlusion, such as an instance where the subject looks away. This is one of the biggest challenges in deepfake software, since FAN landmarks have little capacity to account for these cases, and tend to erode in quality as the face averts or is occluded.

The new system is able to avoid this trap by defining a contour energy that’s capable of matching the boundary between the 3D face (3DMM) and the 2D face (as defined by FAN landmarks).

A useful deployment for such a system would be to implement real-time deformation, for instance in video-chat filters. The current framework does not enable this, and the computing resources necessary would make ‘live’ deformation a notable challenge.

According to the paper, and assuming a 24fps video target, per-frame operations in the pipeline represent latency of 16.344 seconds for each second of footage, with additional one-time hits for identity estimation and 3D face deformation (321ms and 160ms, respectively).

Therefore optimization is key to making progress towards lowering latency. Since joint optimization across all frames would add severe overhead to the process, and init-style optimization (presuming on the consistent subsequent identity of the speaker from the first frame) could lead to anomalies, the authors have adopted a sparse schema to calculate the coefficients of frames sampled at practical intervals.

Joint optimization is then performed on this subset of frames, leading to a leaner process of reconstruction.

The warping technique used in the project is an adaptation of the authors’ 2020 work Deep Shapely Portraits (DSP). 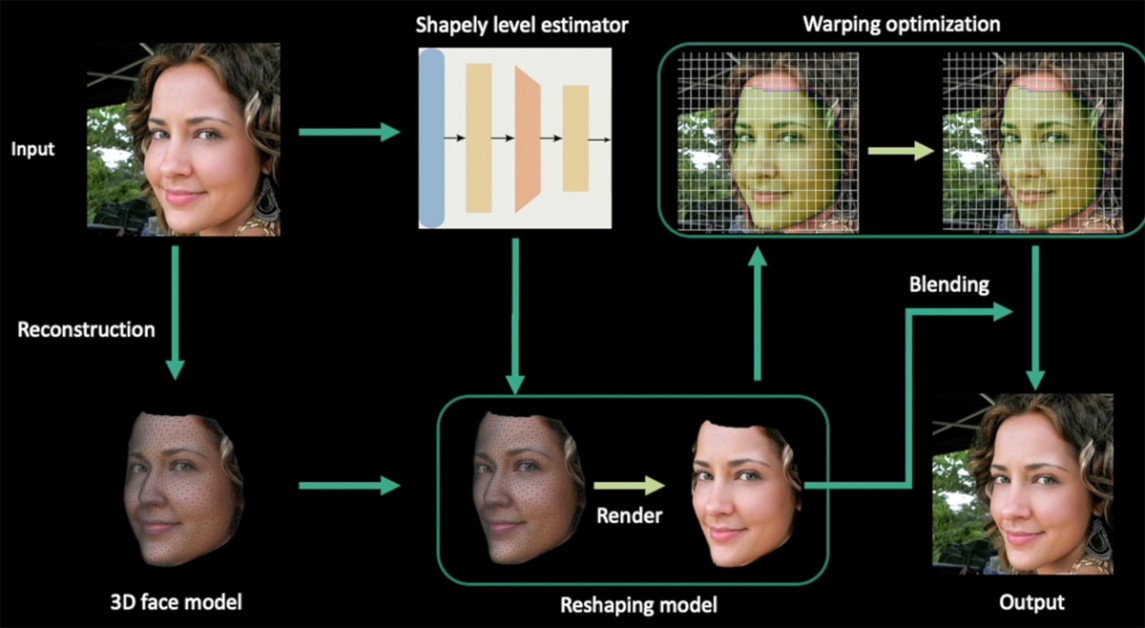 The authors observe ‘We extend this method from reshaping one monocular image to reshaping the whole image sequence.’

The paper observes that there was no comparable prior material against which to evaluate the new method. Therefore the authors compared frames of their warped video output against static DSP output.

The authors note that artifacts result from the DSP method, due to its use of sparse mapping – a problem that the new framework solves with dense mapping. Additionally, video produced by DSP, the paper contends, demonstrates lack of smoothness and visual coherence.

‘The results show that our approach can robustly produce coherent reshaped portrait videos while the image-based method can easily lead to noticeable flickering artifacts.’

Check out the accompanying video below, for more examples: