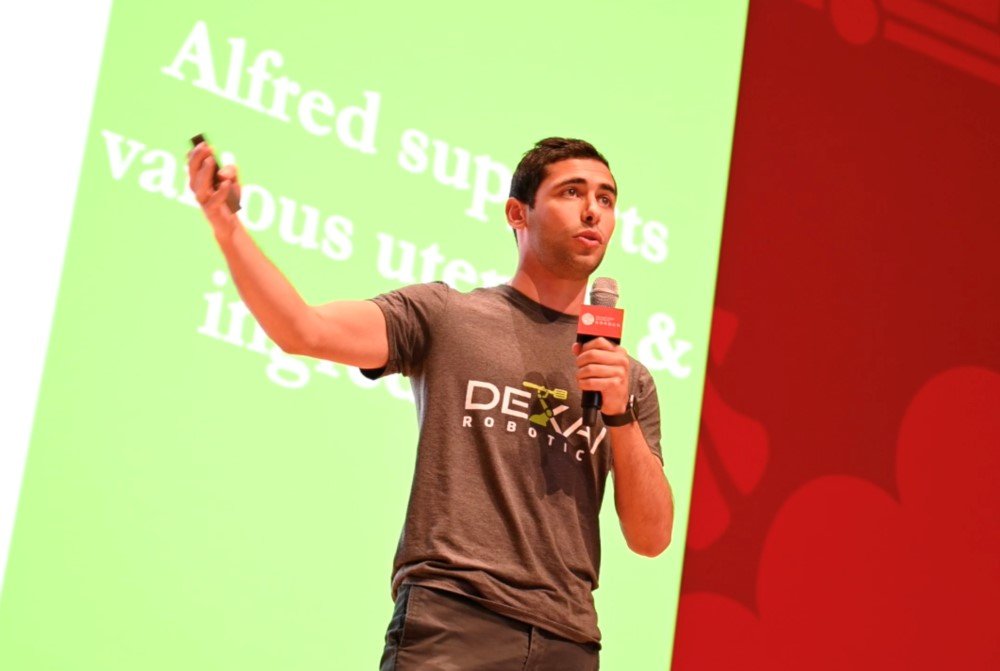 Anthony is the co-founder and COO of Dexai Robotics, a startup that automates activities in commercial kitchens using flexible robot arms. Prior to Dexai, Anthony worked as a consultant with the Boston Consulting Group, focusing on growth strategies. Anthony holds a MBA from Harvard Business School, and a B.E. in Mechanical Engineering and a B.S. in Mathematics from the American University of Beirut. Outside of work, Anthony enjoys chasing soccer balls and exploring sunken sea treasures.

What is it that attracted you to robotics initially?

I’m amazed by our ability, as humans, to develop “complex tools” out of simple components to improve our standard of living. At the same time, we’re living in a period during which many enabling technologies are being improved by an order of magnitude. Just look back at the past two decades: collaborative robots were created and became affordable for commercial applications, control theory advanced substantially, computer vision is arguably at the super human level, machine learning is enabling very rapid decision making, and the internet infrastructure improved enough to connect all of this together. Right now is really the most exciting time for robotics; for the first time in history, robot performance is soon going to exceed our expectations.

You have a very diverse background including being an Associate for the Boston Consulting Group (BCG). One of your projects was designing a prediction tool to detect illicit activity using advanced statistical methods and big data analysis. Could you talk about this project?

At a high level, that project involved analyzing a very large dataset, comprising demographic and behavioral data for commercial establishments, to unearth predictive behavior. We used advanced statistical modeling techniques, such as binomial regression, to compute the probability of illicit activity based on past non-related data. The results were staggering: from data such as types of licenses owned or historical financial performance, we were able to make predictions an order of magnitude more accurate than the baseline.

Can you discuss how you transitioned away from being an Associate of BCG, to launching Dexai Robotics?

My BCG experience enriched my business knowledge tremendously, as I helped companies navigate various strategic and managerial topics. During this experience, I realized that the projects I enjoy the most are those related to market entry or helping clients set up businesses from the ground up, which pushed me in the entrepreneurial direction. I decided to pursue a Master of Business Administration, and joined Harvard Business School. At HBS, I focused on entrepreneurship and related classes, and had the fortune to experiment with a few ideas at the school’s innovation lab. Midway through the MBA, I met Dave Johnson (now Dexai’s co-founder), and together we started developing business plans to commercialize technology that he and others at Harvard and MIT were developing. A few business competitions and tens of customer calls later, Dexai was born!

Dexai Robotics features AIfred a robot that automates activities in commercial kitchens and the food industry. What are the tasks that AIfred is capable of?

Alfred is currently capable of end-to-end meal assembly for a variety of recipes. Alfred can use regular utensils such as tongs, dishers (scoops), spoons, and ladles to pick and/or scoop almost any ingredient. It takes Alfred ~1 day to “learn” a new ingredient, as long as it can be manipulated using the mentioned utensils. Alfred can also “see” and identify different ingredients in the workspace, pass bowls around, and perform simple tasks such as opening a rice cooker or an oven door. In the future, Alfred will learn additional tasks such as operating kitchen equipment (e.g., fryer, grill), and perform ingredients preparation tasks (e.g., cutting, slicing).

Is there a learning curve for a restaurant operator who wishes to install AIfred in their commercial kitchen?

There is a slight learning curve, in-line with most other kitchen appliances. The initial setup consists of entering supported recipes into Dexai’s software, specifying ingredient portions, and connecting Alfred to the point-of-sale system. After that, Alfred runs pretty much on its own, with restaurant operators only needing to periodically refill food bins with fresh ingredients. Alfred is designed to simplify the lives of restaurant workers: we made a conscious choice to solve the “difficult” problem ourselves, so that our customers don’t have to worry about that. Alfred’s camera, combined with Dexai’s proprietary AI software, allows for seamless adaptation to the majority of layouts and processes. Further, Alfred can adapt to changes in the environment, such as moving a bowl around, or swapping ingredients, to maximize the operator’s flexibility.

What’s the initial reaction from restaurateurs that initially test the AIfred robot?

That’s a very interesting question because the reaction progresses very quickly. The universal initial reaction is to take out your phone and start snapping pictures and videos. There’s something really magical about a robotic arm smoothly moving around in a purposeful manner. Maybe it’s because popular culture has us expecting clunky, abrupt motions, similar to when someone makes a “robot impression”. Contrast that with the robot moving very smoothly, picking up utensils, and scooping food the same way a person would do, and your reaction dramatically changes.

Are there any brand names or large restaurants that are currently using AIfred or trialing AIfred?

We deployed a couple of successful trials to test the system, and had to pause due to concerns for our employee safety related to COVID-19. Our customer names are all still confidential and our initial focus is on salads and bowls. Later this year, we will have our first customer-facing deployment, so stay tuned!

One of your earliest robotic projects was the Mule Robot which assisted users with transporting everyday merchandise. How did this early experience influence your thinking on robotics?

My biggest learning from the Mule Robot project was that solving the technical problem is a necessary but insufficient requirement for success. Without customer focus and a robust business model, even the most elegant technical solution won’t leave the research lab. For the Mule Robot, we developed a solution for residential applications, but struggled to take the project forward. Alternatively, thinking about the same problem with a more commercial lens: transporting merchandise inside a building is perfect for “room service” applications in hospitality. Today, a Chicago hotel uses two robots automating room service, made by a startup that successfully commercialized a similar project.

What do you believe a commercial kitchen of the future will look like? How will robots cooperate or in some cases replacing kitchen staff?

I believe that kitchen staff will always be needed; hospitality is incomplete without a human touch. Regarding the kitchen of the future, the answer really depends on how far in the future we’re looking. In the short and medium term, we’ll see dramatic efficiency increases in different areas of the kitchen, either through automated single-use equipment such as sushi rollers and vegetable slicers, or through end-to-end flexible automation such as ingredient assembly through Dexai’s Alfred. Longer term, in 10 years or so, the commercial kitchen will capitalize on efficiencies by combining all these solutions, and will feature novel cooking techniques instead of only efficiency gains. To illustrate this point, imagine a circular, vertically stacked serving counter operated by a robot at the center which can reach inside the oven and make changes to the meal while it cooks. Eventually, the target is to get from raw ingredients to prepared meals through the smallest and most efficient operation.

We’re really excited to have Alfred’s first public appearance this year. Especially given the health crisis that our world is suffering from, securing the access to prepared food is a necessity. We look forward to a future where everyone has access to affordable, healthy foods!

Thank you for the fantastic interview. I look forward to the day when we see different version of AIfred in commercial kitchens everywhere. Anyone who wishes to learn more should visit Dexai Robotics.