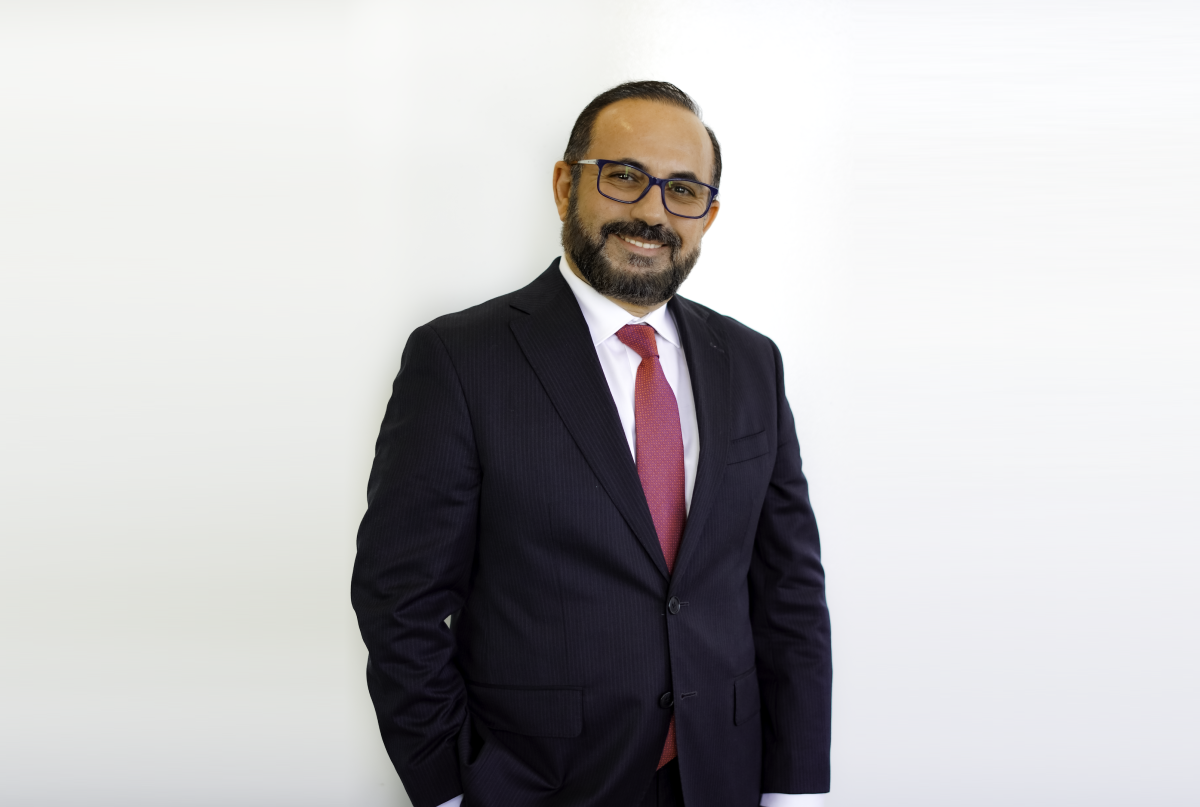 AJ Abdallat is the founder and CEO of Beyond Limits, a pioneering Artificial Intelligence company based in Glendale, California. Beyond Limits is a pioneering AI company with a unique legacy from the NASA space program, notably AI technology developed at the Jet Propulsion Laboratory (JPL). They enhance software systems developed for NASA/JPL, giving them additional capabilities and hardening them to industrial strength.

You’ve had a long fascination with space, what was it that sparked this interest?

I watched Star Trek and Doctor Who as a boy, and was always fascinated with space from a young age. I remember having a conversation with my mother while we watched the moon landing and realized this was not science fiction, this was reality. I witnessed a human being taking the first step on the moon and that is a moment I will never forget. That moment encouraged me to become an engineer.

After graduating from Engineering school, my career led me to work on a High-Performance Computing (HPC) project with Caltech, which manages the Jet Propulsion Laboratory (JPL) for NASA. As a boy who watched the moon landing, I was honored to be working with some of the most brilliant minds on the planet supporting the unmanned space program. In 1998 together with my partner, Dr. Carl Kukkonen (Director of the Center for Space Microelectronics Technology at JPL), with the support of Caltech and Dr. David Baltimore (Caltech President) we launched an entity to commercialize technologies used in space for industries on Earth. We created many companies, but the most recent one and the one I’m most proud of is Beyond Limits, which is focused on industrial artificial intelligence.

Beyond Limits launched as a startup in 2014, as a spinoff from the Jet Propulsion Laboratory (JPL) & Caltech. Could you clarify the current relationship between these three entities?

The California Institute of Technology (Caltech) is a research university in Southern California. In 1936 Caltech faculty formed the Guggenheim Aeronautical Lab, known today as the Jet Propulsion Laboratory (JPL), to carry out the first rocket experiments. Today, JPL is a federally funded research center and NASA field center that is managed by Caltech to carry out robotic space missions. Beyond Limits was created to commercialize technologies originated from Caltech NASA/Jet Propulsion Laboratory leveraging significant R&D investment from NASA and the DoD to solve complex problems here on Earth.

Our heritage comes directly from JPL and Caltech – in both our leadership team and our technology. Beyond Limits came from organizations tasked with solving unsolvable problems, and we still hold that mission today.

On the product side, we enhance software originally developed for NASA and JPL, building on their capabilities to expand their applications in new industries in addition to our in-house development and R&D efforts. Today, we currently have more than 200 Intellectual Property building blocks, and we continue to partner with Caltech on new projects.

You’ve stated before that space is a harsh and dynamic environment, and that the technologies that are developed to endure these extremes are perfect for energy companies. What are some of the applications derived from space that are currently being used by Energy companies?

The energy sector faces similar challenges to the space program. For instance, both operate in harsh environments where safety is important, whether that environment is in deep space or the Earth’s subsurface. In these situations, data can be missing or misleading, which can create problems for machine learning programs and even human operators. That’s why Beyond Limits leverages cognitive technologies used in unmanned space missions. Our Cognitive AI uses human-like reasoning and knowledge provided by domain experts, not just data, to understand situations, solve problems and recommend actions.

Incorporating that expert, human knowledge into the AI’s decision-making process is extremely valuable for energy companies. EY reported that the Society of Petroleum Engineers found that nearly 54% of its members are over 55 years old. As these seasoned experts with decades of experience retire, the energy industry will be left with a knowledge gap. Cognitive technologies help close this gap by encoding domain expert knowledge into the system and democratizing that knowledge. At Beyond Limits, we’re applying this technology across the energy value chain, from exploration and commodity transportation to refining and product formulation.

Our NASA technology heritage has also propelled us to incorporate explainable AI into all of our solutions. In high-value, high-risk sectors such as energy, it’s important that AI technologies not only provide actionable intelligence, but also explain how decisions were made with transparent, understandable audit trails.

Beyond Limits uses Cognitive AI, which is layered overtop traditional deep learning, can you explain what Cognitive AI precisely is?

Cognitive AI is a hybrid of conventional numeric AI, which includes machine learning and neural networks, and advanced symbolic AI, which allows the system to analyze, reason, hypothesize, correlate, plan, learn and teach. By combining the two approaches, the solution is able to bring situational awareness with human-like reasoning to diagnosing issues, prognosticating problems and suggesting remedies.

The key to Cognitive AI is to build an initial set of models and propose hypothetical extensions. Beyond Limits Cognitive AI systems have the unique capability to look for guidance from encoded human expert knowledge combined with historical and external data. That allows us to model hypothetical paths to predict the likely outcomes, and propose courses of action to make smart decisions, even under less-than-ideal data conditions.

Do you believe that the combination of the above deep learning with cognitive AI will eventually lead us to Artificial General Intelligence (AGI)?

Cognitive AI is the next step in artificial intelligence development, and it will act as a foundational stepping stone in reaching AGI. In a recent study from the University of Oxford, 50% of AI researchers surveyed said AGI would likely be a reality by 2040 – but I believe recent progress means we may see it come to fruition even sooner than that.

There are two foundational components of true AGI that I think about when considering when we might see it become a reality. The first is emotional intelligence, and although we’re not there yet, cognitive AI and deep learning systems have grown much more sophisticated in applying the basic principles of emotional intelligence when presented with problems. The second and more difficult component is near-human level thinking, which will require new technologies like quantum computing that are still outside our grasp. But if we can achieve these, we are well on our way.

Beyond Limits is working on the world’s first cognitive power plant, could you elaborate on what this project is?

We’re really excited about this one. The power plant will be installed as part of a large-scale infrastructure program to drive core industrial capacity and power economic development in West Africa. It’s the first implementation of a Cognitive AI power plant built from the ground up that embeds intelligence and awareness into all of its operations. That provides operators with facility-scale insight, making the plant safer, maximizing its efficiency and productivity, and making it more environmentally friendly.

The efficiency of power generation from natural gas can be affected by environmental conditions such as temperature and humidity. Human operators can make adjustments to improve efficiency, but that relies on their individual experience and knowledge. We’ve developed an AI system for this plant that actually encodes expert-level human knowledge to make and validate recommendations to help operators manage production for peak efficiency, maintenance planning and longer-term lifespan. The AI system’s entire process for reasoning and recommendations can also be viewed via an audit trail, so human staff understand how it reached those decisions and can help train the system if it does ever make a mistake to improve its decision-making process in the future.

I’m very proud of our team and Beyond Limits’ fast growth. We’re expanding globally as an industrial AI company and venturing into new verticals including renewables & low carbon initiatives, utilities and healthcare. I’m especially excited for our expansion into healthcare. I believe in using AI for good, which is why we partnered with renowned medical experts to build a Coronavirus Dynamic Predictive Model, which is available publicly at no cost for government policy makers and medical establishments. The dynamic AI model provides policy makers with actionable information and more accurate forecasting to make informed decisions concerning the supply and demand of crucial medical equipment. Innovation is key to our future and our children’s future. I’m proud to have Beyond Limits contribute to the next frontier by enhancing AI innovation.

Thank you for the great interview, it’a amazing how the moon landing has inspired so many great minds. Readers who wish to learn more should visit Beyond Limits.