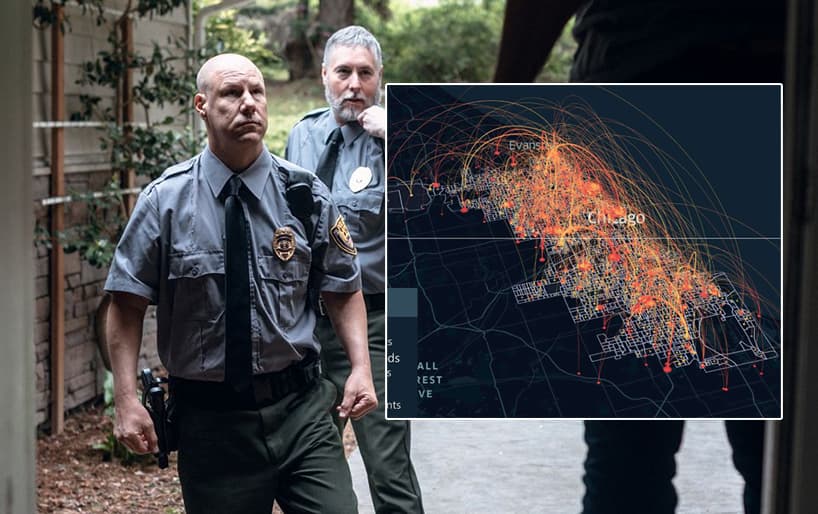 A new research paper from the University of Buffalo studies the relationship between alcohol outlets and domestic violence (DV) in various neighborhoods of a US city, based on anonymized GPS location data from a mobile phone network.

The paper concludes that liquor store activity is more strongly associated with domestic violence than any other location where alcohol can be purchased, indicating that the correlation between alcohol outlets and domestic violence could be more nuanced than recent studies have suggested:

‘Remarkably, the variable of liquor store visit rates shows the highest positive contribution to DV rate compared with other variables. This result suggests that liquor store visitation is an important predictor for DV rate at the neighborhood level.

‘Interestingly, visits to two other types of alcohol outlets (i.e., drinking places and breweries) have negative coefficients, which are consistent with the correlation analysis.

‘This result indicates that visits to these outlets are, in fact, associated with lower DV rates. This result is surprising, as a higher density of drinking places in a neighborhood was often thought to be related to a higher DV [rate]’

From the paper, a mapped visualization depicting visits between liquor stores and home neighborhoods over a week in 2019, prior to the data-disrupting advent of COVID. Source: https://arxiv.org/ftp/arxiv/papers/2203/2203.04088.pdf

The authors theorize a possible near-inverse relationship between the frequenting of more prestigious alcohol-related locations and domestic violence, opining that visitors to locations such as breweries and bars are likely to be of a higher socioeconomic status, which reduces their likelihood of being involved in domestic violence incidents.

The paper is titled The role of alcohol outlet visits derived from mobile phone location data in enhancing domestic violence prediction at the neighborhood level, and comes from three researchers across the departments of mathematics, medicine, and geography at Buffalo.

The researchers’ objective was to determine whether anonymized mobile location data could be used, in conjunction with available crime statistics, to predict incidents and frequencies of domestic violence at neighborhood level, insofar as these may relate to the availability of purchasing alcohol in the locality.

The first task was to define neighborhoods, which was accomplished by the use of Census Block Groups (CBGs), the smallest available geographic units that still retain complete demographic and socioeconomic data, as provided by the American Community Survey (ACS).

The anonymized mobile location data came from SafeGraph, a commercial company that offered data covering the entire United States to the researchers for free. The dataset covers 3.6 million points-of-interest across the States, including those that sell alcohol, such as liquor stores, bars, wineries, and breweries.

The study covers a period leading up to but not including the statistically disruptive outbreak of COVID,  and the home locations of visitors to alcohol outlets was inferred by SafeGraph based on nocturnal locations in the prior six weeks. Neither the exact trajectories of the visits nor the exact home location of the users are disclosed in the data – a  sampling that matches the ‘generalized’ boundaries of the neighborhoods identified in the ACS data.

The trajectories investigated in the work do not necessarily correlate to home>liquor-store>home visits, but may represent paths to another domestic setting, with a stop-off at a liquor store en route.

Though the available GPS data encompasses the entire nation as a potential area of investigation, the researchers chose Chicago, due to the relatively well-labeled information available via the Chicago Police Department’s Citizen Law Enforcement Analysis and Reporting (CLEAR) System.

The CLEAR dataset includes crime types (such as arson or assault), as well as the time, location and latitude/longitude pairs for the incident, among other data points. It also contains a binary value for ‘Domestic’, indicating whether the visiting police officers attributed the incident as related to the Illinois Domestic Violence Act of 1986.

The researchers note that a number of non-‘domestic violence’ crimes (including arson), had been mistakenly attributed to this category, and filtered out these incidences.

Left, the boundaries of the city of Chicago, together with its Census Block Groups (CBGs), right, extracted domestic violence incidents.

Only occasions where a visit to a liquor store lasted four or more minutes was counted. Additionally, the researchers concede that there is no way to know if the visit resulted in a purchase, or the extent or type of the purchase. Further, they note that domestic violence is considered to be among the most under-reported of crimes, contributing to the approximative nature of the results obtained in the study.

The data was investigated with the use of four approaches: Random Forest (RF), Ordinary Least Squares (OLS), Deep Neural Network (DNN), and Geographically Weighted Regression (GWR). OLS and GWR are statistical rather than machine learning methods.

General overview of the experiments, spanning four methods and four categories of alcohol points-of-interest in the SafeGuard data, cross-referenced to domestic violence incidents in the CLEAR data.

Results across the four methods indicate that the relationship between liquor stores and domestic violence varies notably across neighborhoods, though the researchers ultimately conclude that ‘increases in liquor store visits are associated with increases in DV rates in most neighborhoods in Chicago’. 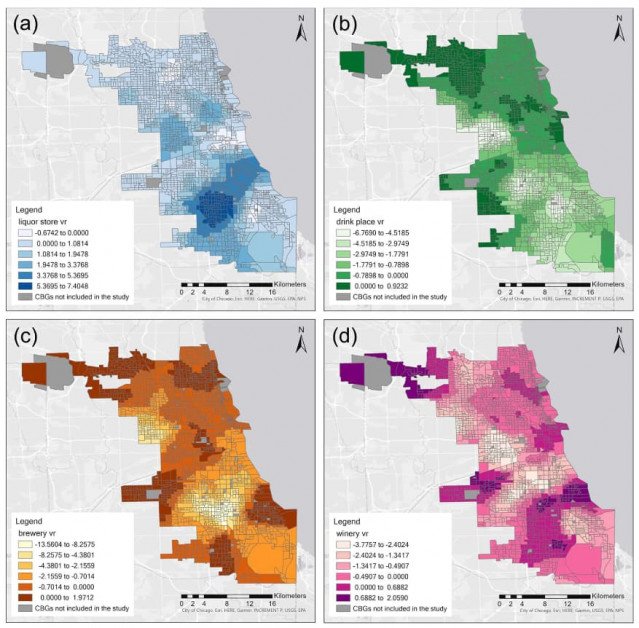 Correlation to DV incidents, based on the four types of alcohol outlet studied in the paper: a) liquor stores, b) drinking place (i.e. bar), c) brewery and d) winery.

The paper contains a more granular outline of the socioeconomic and demographic indicators related to the analyses.

‘Our results provide further insights into the relationship between alcohol use and DV. Among the four types of alcohol outlet visits, liquor store visits have the strongest association with increased DV in the home neighborhoods of the liquor store visitors.

‘The Routine Activity Theory of Crime suggests three necessary conditions for a crime to occur, which are: a motivated offender, a potential target, and a lack of anything to inhibit the offender’s behavior. Liquor store visits suggest that the purchased alcohol will be consumed at home where all three conditions are met: the offender and the potential target are in close proximity to one another and the alcohol provides the [disinhibitor].’

The authors further suggest that results from studies such as these could contribute to future policy decisions concerning regulation of liquor stores in areas where their relationship to domestic violence seems manifest from the data, with possible interventions including the restriction of permitted sales hours and limiting the number of alcohol licenses.

* My conversion of the authors’ inline citation to hyperlink.