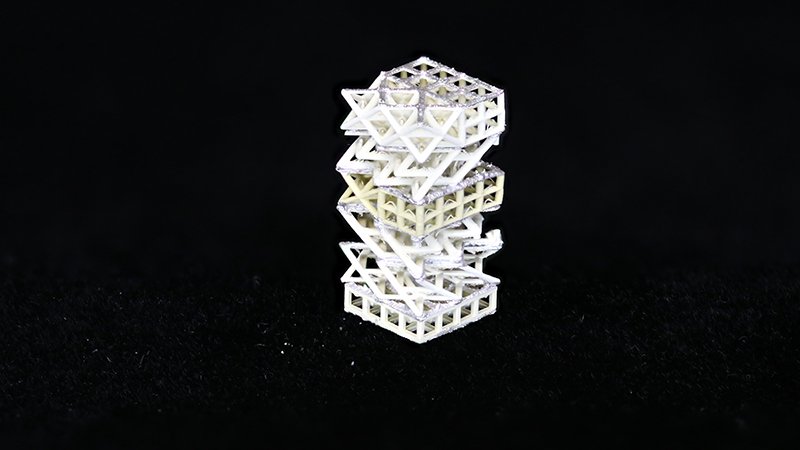 A team of engineers at UCLA has developed a new 3D printing technique and design strategy that enables robots to be built in one single step.

The new study, which demonstrates how the robots can be constructed and walk, maneuver, and jump was published in Science.

The new technique involves a 3D printing process for engineered active materials with multiple functions, or ‘metamaterials.’ It enables the manufacturing of the entire mechanical and electronic systems required for operating a robot at once. After the ‘meta-bot’ has been 3D printed, it can carry out movement, propulsion, sensing, and decision-making.

The printed materials are made up of an internal network of sensory, moving and structural elements that move by themselves after being programmed. Because this internal network is brought together in one place, all that’s left to do is produce a single external component — the small battery to power the robot.

Xiaoyu (Rayne) Zheng is the principal investigator of the study and an associate professor of civil and environmental engineering, as well as mechanical and aerospace engineering at the UCLA Samueli School of Engineering.

“We envision that this design and printing methodology of smart robotic materials will help realize a class of autonomous materials that could replace the current complex assembly process for making a robot,” said Zheng. “With complex motions, multiple modes of sensing and programmable decision-making abilities all tightly integrated, it’s similar to a biological system with the nerves, bones and tendons working in tandem to execute controlled motions.”

The team integrated an on-board battery and controller to make fully autonomous 3D printed robots. Each one of the robots is the size of a fingernail, and according to Zheng, this new method could lead to new designs for biomedical robots. One such biomedical robot could be a swimming bot that navigates autonomously near blood vessels to deliver drugs at target sites in the body.

Another application of the 3D printed bots is to send them into hazardous environments, such as a collapsed building, where a swarm of them can access tight spaces. These meta-bots could then assess threat levels and assist in rescue efforts.

This is a major breakthrough in the field of robotics since most of the current robots require a series of complex manufacturing steps to construct them. This process results in heavier, bulkier, and weaker robots.

To develop the new method, the team relied on a class of intricate lattice materials that change shape and direction in response to an electric field. They can also create an electrical charge as a result of physical forces.

The robotic materials developed by the team are only the size of a penny and consist of structural elements that help them bend, twist, expand, contract, or rotate at high speeds.

On top of all of this, the team released a methodology that can be used to design the robotic materials, enabling users to create their own models.

Hauchen Cui is the study’s lead author and a UCLA postdoctoral scholar in Zheng’s Additive Manufacturing and Metamaterials Lab.

“This allows actuating elements to be arranged precisely throughout the robot for fast, complex and extended movements on various types of terrain,” Cui said. “With the two-way piezoelectric effect, the robotic materials can also self-sense their contortions, detect obstacles via echoes and ultrasound emissions, as well as respond to external stimuli through a feedback control loop that determines how the robots move, how fast they move and toward which target they move.”

This new 3D printing technique will play a major role in the field of robotics, helping make the construction of such robots far more efficient.