Is Sophia Robot using AI or is it a Marketing Stunt? - Unite.AI 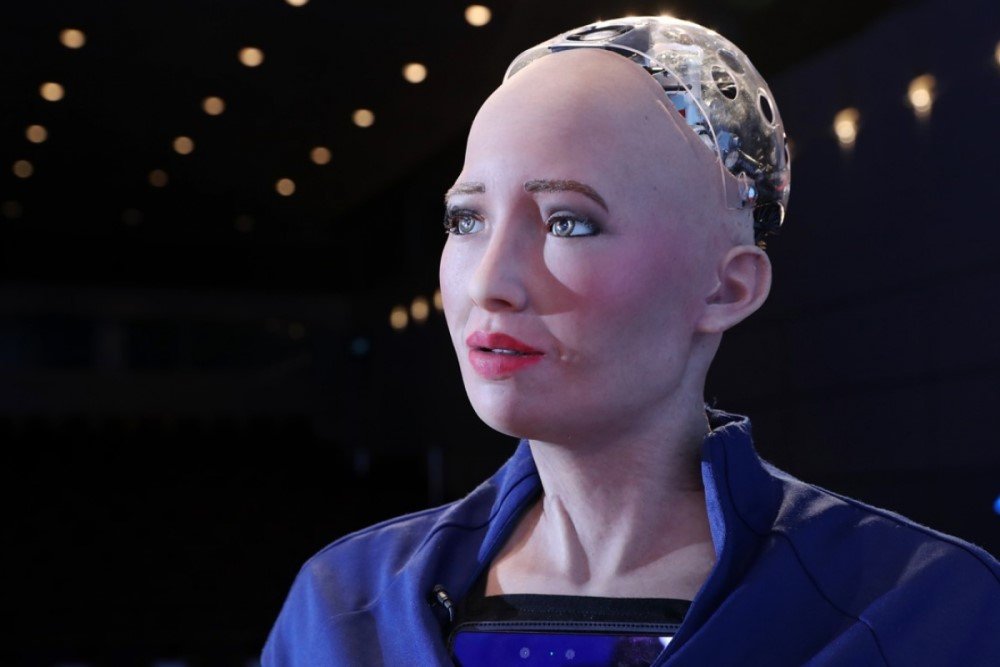 If you’ve been following AI for any period of time you have probably heard of Hanson Robotics humanoid Robot Sophia. From a marketing point of view Sophia has been transformational, she has had a romantic encounter with Will Smith, she has been featured on The Tonight Show with Jimmy Fallon, as well as countless other media appearances. There was even justified global controversy when Saudi Arabia which denies women equal rights granted Sophia citizenship.

Something that may seem odd, is that Sophia is rarely discussed in serious AI debates, even while she is busy scheduling public appearances, and being showcased at blockchain conferences. To understand the reasoning behind this, an exploration of the history of its two eccentric representatives needs to be undertaken.

Who is David Hanson?

David Hanson is the founder and CEO of Hanson Robotics.

David grew up in Dallas, Texas reading the works of Isaac Asimov and Philip K. Dick. Isaac Asimov is a science fiction writer who contributed to the popularization of robotics by writing 37 science fiction short stories and six novels featuring positronic robots from 1940 to 1993. The movie starring Will Smith I,Robot was based on one of these short stories.  While the physical appearance of Sophia closely matches the covers, and different illustrations of these works of science fiction, she was modeled after Audrey Hepburn and Hanson’s wife.

David pursued his passion for art and creativity from a young age. He has a Bachelor of Fine Arts from the Rhode Island School of Design in film/animation/video, and a Ph.D. from the University of Texas at Dallas in interactive arts and engineering,

He then pursued a career as an Imagineer at Walt Disney. While working at Disney he worked on creating sculptures and robotic technologies for theme parks.

In 1995, David designed a humanoid head in his own likeness,  which was operated remotely by a human. This remote humanoid operation is a precursor to Sophia and is instrumental in understanding that the technology behind Sophia may be more of an illusion than what those in the AI community may qualify as AI or even machine learning.

David fully understands the importance of having a humanoid robot that has an appearance that is both non-threatening, and welcoming. Credit should absolutely be given to David for creating a robotic humanoid that has been able to capture the human imagination with very limited and scripted interactions with humans.

It is clear from reviewing David’s background, that he has been instrumental in the aesthetics of Sophia. The question remains what type of AI is being used with Sophia?  And is this AI on a path towards AGI (Artificial General Intelligence) as claimed by its other eccentric spokesman Ben Goertzel?

Who is Ben Goertzel?

Ben Goertzel is a brilliant full-stack AI researcher and the chief scientist and chairman of AI software company Novamente LLC; chairman of the OpenCog Foundation; and advisor to Singularity University.  He was formerly Chief Scientist of Hanson Robotics, the company that created Sophia. He is currently CEO & founder of SingularityNET.

Ben is someone who at first appears to be an eccentric genius, and when you watch him speak it is clear that he is well informed. He shares the same views as his friend Ray Kurzweil  and these views are shared in Ray’s seminal book The Singularity is Near. Ben believes that AGI is fast approaching, and as Ray predicts that 2045 will be the approximate timeline of the singularity, an event marked when human intelligence and nonbiological intelligence will merge.

The singularity is such a focal point to Ben’s existence, that he created SingularityNET in 2017. As described on the company’s website:

SingularityNET is a full-stack AI solution powered by a decentralized protocol. We gathered the leading minds in machine learning and blockchain to democratize access to AI technology. Now anyone can take advantage of a global network of AI algorithms, services, and agents.

SingularityNET raised funds in 2017 in what is called an Initial Coin Offering (ICO).  The timing of the raise was excellent as it was during the ICO craze,  a total of $36 million was raised in less than 60 seconds. Investors would receive AGI tokens, the AGI token would in theory offer the following benefits:

The AGI Token is a crucial aspect of SingularityNET, and it can be utilized in a variety of ways. It will allow for transactions between the network participants, enable the AI Agents to transact value with each other, empower the network to incentivize actions that the community deems ‘benevolent’ and will allow for the governance of the network itself.

Herein is why Ben Goertzel is often speaking at cryptocurrency and blockchain events.  The AGI token was the fundraise for SingularityNET, and the association to Sophia is quite simple. Sophia is shown at these events to keep investors interested in the project. This is how the relationship between SingularityNET and Sophia is described:

SingularityNET was born from a collective will to distribute the power of AI. Sophia, the world’s most expressive robot, is one of our first use cases. Today, she uses multiple AI modules to see, hear, and respond empathetically. Many of her underlying AI modules will be available open-source on SingularityNET.

In other words, SingularityNET associates itself with Sophia to raise funds, and Sophia may at some point use an AI module hosted on SingularityNET.  While Sophia appears to be using some forms of AI, it appears to be very basic. Nonetheless, Sophia is a platform with the ability to have AI modules swapped in or out. This means that her current level of AI is not indicative of future performance.

When watching Sophia on stage there are indicators that we might be spellbound by a well orchestrated magic trick. Ben is especially very well versed at speaking quickly, he enchants you with his intelligence, and gives Sophia very little actual free association speaking time.

If Sophia was as intelligent as claimed, you would want to give her the bulk of the speaking engagement, and investors would be lining up at the door.

Sophia is often wheeled in, which indicates a lack of mobility. She also seems to lack awareness of her surroundings, she is unable to focus her attention on any one object. She blinks a lot, randomly smiles, and offers other random facial expressions.

There is also a lack of input technology. When it comes to building an AGI there is common consensus that input devices are important to form an emergent consciousness. A notion of  “self,”  is needed as related knowledge and functions are developed gradually according to the system’s experience. Based on Sophia’s lack of mobility and input mechanisms this seems to be something that is ignored. Her only input seems to be auditory, with possibly some type of basic computer vision.

There is also the problem that all of her conversations are pre-scripted. If you want to book Sophia for an event, you need to send five questions which need to be pre-approved by the organizers. The questions need to be asked in a specific order. This signifies that based on the preset questions, Sophia is simply parroting pre-canned responses. This is why the answers she gives are always so interesting, they are designed to evoke emotion in the audience, and the answers are delivered by a human using Sophia as a channel.

In other words, Sophia may be using at most computer vision, voice recognition technology, and perhaps some form of Natural Language Processing (NLP), but there is no indicator that she is actually analyzing the meaning behind what is said, or that she understands the meaning behind her answers.  Amazon’s Alexa, and Apple’s Siri are much more advanced AI systems, and neither company would claim that either systems are anywhere near an AGI system.

It’s an interesting social experiment to understand how humans communicate and interact with humanoid robots, but at no time is there any indication that Sophia could even be remotely considered intelligent or self-aware.

In an interview with The Verge, Ben acknowledges that audiences may be overestimating Sophia’s abilities:

“If I tell people I’m using probabilistic logic to do reasoning on how best to prune the backward chaining inference trees that arise in our logic engine, they have no idea what I’m talking about. But if I show them a beautiful smiling robot face, then they get the feeling that AGI may indeed be nearby and viable”.

He then continues to state the following:

“None of this is what I would call AGI, but nor is it simple to get working,  and it is absolutely cutting-edge in terms of dynamic integration of perception, action, and dialogue.”

What are the technologies being used by Sophia? According to Ben’s Blog:

It is due to mixed and confusing communications regarding her technologies, and the references to AGI, that Sophia continues to be adopted by a mainstream audience that may be deceived in believing that Sophia is more intelligent than she actually is.

Sophia is for the most part ignored by an AI community that understands that the current state of AI is far more advanced than what Sophia is capable of illustrating.  What that AI community may be overlooking is the power of rapid exponential technological growth as described in Kurzweil’s “Law of Accelerating Returns“.  While Sophia’s AI is currently far from AGI, with Sophia capable of hosting any type of AI module, she has the ability to have her neural network upgraded or replaced at any time. We should therefore not be surprised if at the end of this journey, Sophia achieves true AGI.